I am 90% overwhelmed by first keeping my sister's social schedule (a drain for an introvert like me), second by house-hunting, and third by the usual overwhelm I feel about the book-selling business.

Somehow, I've been working on a book between all that. This is another book you could say I've been researching for 2-3 years (as was the case with Crow Vector.) It's a World War II spy novel, and I started writing it while driving 10 hour days from Arizona to Illinois. (I'm apparently nuts. But the darned thing came to life right then, so I had to begin!)

Because of how busy I am, there is no way I'm going to be able to draft this at my typical one-month pace. But I have a book coming out in late April and one in July, so I should be able to hit September with this one. Maybe. Possibly. I hope!

A real life person who appears in three chapters in the book, Vera Atkins, the woman who supervised the female spies in the SOE and spent years after the war trying to find out what happened to the ones who never returned. 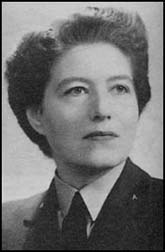 House-hunting with a self-reliant mindset

I've been house-hunting non-stop for two weeks, and I've learned some interesting things.

- buy a house in a less regulated state than the one I'm in! Crazy long lists of rules
- abutting farm land sounds good...until you realize they are spraying a lot of chemicals right next to your garden and Roundup will kill it and neonicitinoids will kill the bees you are hoping to attract
- not all real estate agents are created equal. It is possible that if a real estate agent wears shoes worth more than your entire closet, she spends time on the wrong things
- I've also learned the difference between foreclosures, foreclosures being auctioned, and short sales (around where I'm looking, there is a buttload of all three of those), and the dangers of each
- some people let houses on which they have mortgages fall to pieces, and I want to weep for the poor house, which did nothing to deserve that
- you might not get everything you want for the price you want. Something has gotta give, and then your time may be spent fixing up a house's problems rather than doing the gardening you'd rather do.

Sorry for a short post. I'll do my best while I'm settling in. And after that...who knows about internet!
Posted by Lou Cadle at 6:00 AM No comments:

The astronomical seasons are determined by the relationship of the sun to a planet (or moon). When a planet is tilted, as the Earth is, when days and nights are equal, you have an Equinox. Spring and Autumn equinoxes are March 21 and September 22. The longest day of the year north of the equator is June 22, and the shortest is December 21.

More goes into starting the warming of spring or the cooling of autumn than mere minutes of sunlight. Atmospheric realities delay heating and cooling, insulating the surface of the world, in effect. So, if the date in the Northern Hemisphere with the most sun is June 21, you might wonder why that isn't the hottest day of the year. It usually isn't. Hottest days are usually in July or August. In San Francisco, because of the influence of the ocean, the hottest day is usually around September 25, after astronomical autumn begins! (This results in an interesting non-atmospheric phenomenon where tourists arriving in June, expecting summer, freeze their bums off, and sweatshirt vendors on the street make a bundle of money selling clothes to them. :D ) In Southern Arizona, years when there's a good monsoon---a season of rain, with clouds coming in by noon most days--June actually is the hottest month, for the cloud cover makes July and August almost tolerable.

Again, the sunniest day of the year in the north is June 22. Interestingly, the closest the sun and earth draw to each other is in January, as the illustration above shows, so the summers in the Southern Hemisphere will be a little hotter, all other matters being equal.

The atmosphere takes time to warm, and the ocean takes longer. This is why San Francisco's seasonal lag is greater than inland lags, and it's why the peak Northern Atlantic hurricane months are September and October, when the ocean has finally warmed up to its summer temps.

Historically, some cultures have named six or eight seasons, not four. Other planets have longer or shorter seasonal lags. Mars's is almost zip! (It has very little atmosphere.) Uranus, on the other hand, has over a hundred years of season lag (data nmsu.edu):

My great-grandmother Nellie was born a "bastard," as they used to say back when. Bad luck landed her mother in dire financial trouble eight years later. Nellie was given over to an orphanage in the 1890s, and from there sold as an indentured servant for seven years, where she worked for a farm family.

I wrote the first part of her story--the orphanage years--as a novel about eight years ago. (I wrote Gray in 2004-2005, for a comparison.) While I'm busy moving, I've been revising it, and it's done except for proofreading. The working title is The Long Trip Home.

My post-apocalyptic short story collection Timeless will be out in May, and this one will likely be out in July (if you're interested) under my Rosellyn Sparks pen name.

Writers speak of "trunk novels"--novels in the trunk that never were published. Once upon a time, there was an actual trunk in the attic, with a paper manuscript or two in it. Nowadays the trunk is more likely to be digital information on a thumb drive.

This is my next-to-last one of those, the one closest to my heart, and for my family's sake, I'll be relieved to get it out there. I think a lot of people will enjoy it beyond them, and it's even appropriate for teen readers who like historical novels, but mostly, I'm doing this one for my family.

It's good to remember where we came from, and how hard our ancestors had it. Most of us lead a relatively easy life today. For much of human history, this was simply not so.
Posted by Lou Cadle at 11:16 AM No comments: