This month in Natural Disaster History: The Great Blizzard of 1888


Imagine emerging from your home, where you've been snowed in for a week, to see a sight like this: 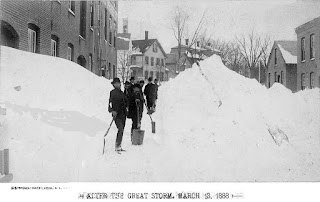 Further, imagine the year is 1888, and you have no electricity. You've enough wood or coal to heat your home, I hope! But don't let a spark escape from your wood fire and start a house fire. The fire department's horse-drawn vehicles cannot reach you. And water may be frozen solid in the water mains in your neighborhood.

Outside, the snow is four feet deep, and the highest drift is fifty-two feet (sixteen meters). That's high enough to cover a three-story house.

The Northeast of the U.S. experienced a blizzard in March, 1888; at least 400 people died in it and perhaps as many as 900. Weather forecasting in 1888 was not particularly accurate, so it came as a complete surprise. People were going about their business, and suddenly, the temperatures dropped. A few flurries that seemed like nothing special quickly became a terrible storm.

The New York Tribune called the storm itself "A furious, blinding gale that made exposure to it an exquisite torture." Another newspaper headline said, "How the tempest howled and raged!" The city of New York would lose transportation, telegraph and telephone lines, and the resulting economic losses would drive the creation of the underground utility lines and subways there and inspire other cities to protect their utilities similarly.

Travelers were stranded (Mark Twain was one, though his letter to his wife about the storm is disappointingly dull), many without food for days, funerals were delayed for weeks, and burials were impossible. People were injured when ferocious winds picked up flash-frozen horse manure and turned it into dangerous projectiles, which helped drive the city to hire street sweepers and institute anti-littering laws. 24 million cubic yards of snow had to be shoveled and moved by wagon in New York City.

It was the second deadly blizzard in the U.S. that year, the first being in January, in the plains states, where hundreds also died.
Posted by Lou Cadle at 7:37 AM