The largest volcanic event in recorded history happened 200 years ago April 10, at Mt. Tambora, in Indonesia. 11,000 died directly as a result of the eruption, and over 100,000 eventually died from effects of the eruption.

175 cubic kilometers of volcanic debris spewed out of the mountain, mostly over just 3 days. The ash plume was, at its most impressive, 33-43 km tall. The energy released was 2.2 million times that of the Hiroshima atom bomb. The eruption was similar in force to the one that created Crater Lake

The mountain was about the size of Mt. Rainier before the eruption.

The aerosols stayed around for two years, causing lower global temperatures, creating famine that killed many thousands of people, and creating spectacular sunsets, some of which have been preserved in paintings like this: 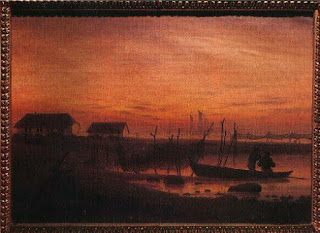 You can read much more about this eruption in Gillen D'Arcy Wood, Tambora: The Eruption That Changed the World (Princeton, NJ: Princeton University Press, 2014
Posted by Lou Cadle at 6:04 AM