A new novel and series begins...

I have finished drafting the first novel of my new series, and if all goes well, it may be for sale as early as April 1. I have to get in line with my cover artist, who might have to subcontract for some original art, and that will probably be the most difficult part to coordinate and most likely to delay it. Still, I think it's safe to say you'll see it sometime in April.

It's a science fiction survival adventure series. While it is aimed at adults, I tried to write it in such a way that mature, intelligent teenagers might also enjoy it.

The novels are full-length novels, but not super-long. Gray III was nearly 100,000 words in first draft, and it took a lot longer than I wanted it to. People like seeing the next novels in a series quickly, so I can't indulge myself in long novels again. The first one comes in right at 60,000 words, and the paperback should be 220 pages or so. I hope to stick to that length for the whole series.

I'm ordering covers and have plotted three novels. If people like the books, I'll write more, possibly seven or eight. If they don't, I'll write the three and move on to something readers enjoy more. I have hundreds more ideas--it's always difficult picking which to write next.

Specifics of content, and the cover I'm going to reveal just before release. For now, all I'll say is I think it's a pretty cool idea!

There is generally an eight-week delay between my saying "I finished writing a novel!" and it being for sale on Amazon. Why? I ignore it for three weeks, and then I revise, and then I run it through four proofreaders. (It was three. Now it's four. And there are always a few errors anyway! And believe me, no one likes that fact less than the author.) I check everything one last time, upload it to Amazon, wait for it to appear "live" on the Amazon.com site, mail my fans who have signed up here for those notices, and it's done. I try to take a day to relax and celebrate and get back to writing or revising the next thing. (I haven't had a whole day off since November, though. I need to work on carving out a day off now and then!)

I'm very close--just a few days--from having paperbacks of the Gray series for sale through Amazon and elsewhere. A few weeks after that, my natural disaster novels will be out in paperback. And in March, I'll release my final (I think) stand-alone natural disaster thriller, Storm, with a striking cover by Deranged Doctor Design: 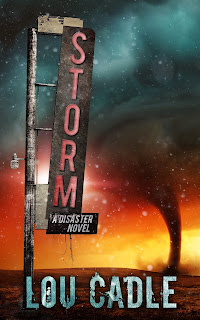