After I drafted my own novel about a pandemic, I re-watched some movies about pandemics.

Outbreak (1995). I always liked this one, but after reading another 3000+ pages on the topic in researching my own novel, I was impressed at how much they got right. (The worst inaccuracy was how the time frame was compressed. You don’t isolate a new virus or come up with a treatment or vaccine that quickly, sorry to say.) 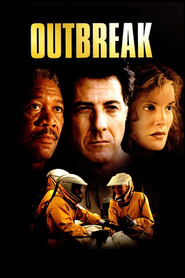 If you don’t know the plot, it’s this: The US Army has saved a killer virus and developed a treatment for it and is hiding it for use as a bioweapon some day. But it re-emerges from nature, as such diseases will, and it enters the human population, and now we’re in trouble, particularly the residents of a small California town. Bad guy general, good guy military doctors working for USAMRIID, conflict as they work at cross-purposes, and a love story provides the B plot. It stars some big-name actors.

There was a maudlin and unlikely scene with a little girl and monkey that should have been edited out, but the helicopter chase in this one is so freakin’ cool! (And I’m not the world’s biggest fan of chase scenes, but when someone does it well, I say so.) I was engaged, rooting for the heroes, and not troubled by the inaccuracies, which I understood were necessary to make it a fast-paced thriller.

I sympathize with the screenwriter and filmmaker. It’s darned hard to tell any disaster story from a single point of view. So much happens, and not any one person can experience all of it. As a writer, I’m always torn between following one character (which I think appeals most to readers) and following several (which tells a more accurate story). This film jumps from a sick family to an EIS worker on the ground to her boss embroiled in politics to an irresponsible blogger, to China where the disease originated, to runs on the stores and riots and roadblocks, and because of all of this, it ends up being something of a mess. In offering too many people to root for, they leave us no one person to root for.

Again, the accuracy is impressive. They clearly had consultants from the CDC helping them through this one, and they made no factual mistakes I noticed. (They based the start of the epidemic largely on the emergence of SARS.)

But despite this, the multiple points of view and lack of a story through-line didn’t thrill me. Still, if you want to get scared about the inevitable coming pandemic, watch it for its accuracy. It should scare you.

This movie does better than Contagion at picking a point of view character. We get to know a nurse in a big hospital and stay largely with her. It does move to other scenes where she couldn’t possibly have been; to tell the full story it must. Our emotional connection is mostly with the nurse, and if you don’t yet appreciate the risks health care workers take in an epidemic, watching this should help you get there.

It also does a good job of touching on economics and politics, and how priorities in those areas are totally opposed to the priorities of actually containing an epidemic. Greed will end up killing more people than it should when the day arrives, and I think it’s good to think about it in advance, so that we might perhaps make more rational decisions when the day comes. (And the day will come.)

It’s a made-for-TV movie, with no superstar actors and low production values, but it’s quite good. Free for now at Amazon Prime Video, if you have that. B+

I do a good deal of complaining about inaccuracy and lack of scientific research in big-budget disaster movies, but it seems that people making pandemic movies do a far better job than people making earthquake or volcano movies. But being accurate and telling a good story is a challenge, as well I know, and we’re lucky there are a couple movies that do both.
Posted by Lou Cadle at 7:24 AM