Not a chance. Solar, wind, and even nukes will provide electricity after coal and natural gas run out. And I’ve been reading up on how fragile the US grid for electricity is, and there’s horrible news there too. A lot of expensive infrastructure has to change fast for renewables to provide all our electricity. 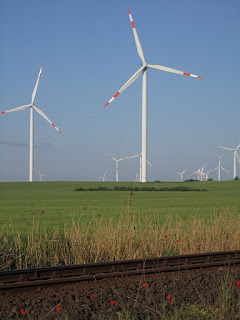 But in any case, electricity isn’t food. It isn’t delivery of goods across oceans. Electricity isn’t putting tires on a vehicle that will rush your kid to the hospital in an ambulance (where, without plastics, I have not a clue what kind of equipment the doctors will be using anyway). Electricity is nice, mind you. It lets Siri and Alexa tell you knock-knock jokes, and it helps me write my novels and get them to your device. It keeps people in Yellow Knife from freezing to death and people in Adelaide from dying of heat stroke. I like electricity a good deal, though I’ve lived without hardly any myself over many years (one 85-watt solar panel, two batteries, DC power, and no other electricity served me fine for a decade, though that was in no way a typical suburban lifestyle).

Oil does so much more than drive us around; an astonishing amount of stuff we rely on is petroleum-based. (Glancing around... My eyeglasses, computer, shoes, carpet, electrical cords, Kindle, some clothing, some furniture bits. The driveway surface outside my front door. The tires on my car, and at least half the stuff under its hood that keeps it running. And I didn’t even have to stretch my neck to see all that!)

Renewables alone won’t give us the electricity we (think we) need. One day, I suspect, electricity will have to be coming mostly from nuke plants, many more plants than now exist, built (because oil is required to do that too) before oil runs entirely out. I will jump on the nutcase forecasting bandwagon to say this much. When/if that happens, no matter what assurances there are, expect a Chernobyl or Fukashima every three to five years or so. So, you know, buy property UPwind, not downwind of your local nuke plant. (I’m downwind of one. Do as I say and not as I do!) Um, also? We’re at peak uranium already. So unless the technology of nuclear reactors takes a massive leap forward in a shockingly short time, that phase won’t last long either. Then our descendants might be part of a great human migration away from extreme climates, the locations of which will likely be different than today’s, because while we can live without electricity for most things (as I found out when living without more than one 85-watt solar panel gave me), we can’t survive 130 degree days and 100 degree nights without it, which is where Phoenix is headed, and soon. Whoever is around after oil can live in temperate climes and with little to no electricity. We hominids did that for hundreds of thousands of years; we will again.

Some people will say we humans are great inventors and we’ll invent our way out of the inevitable end of oil. Perhaps, but I don’t believe we will because you cannot invent your way out of the rules of physics and biology, and nothing on the horizon looks able to replace most uses of oil. Minor new technologies will create minor improvements (as when electric car batteries can be manufactured more cheaply or to weigh much less, or when solar panels may one day not require almost as much electricity to manufacture as they’ll put out over their lives, which is the current state of affairs).

Of course and on the other hand...people used to living life one way will resist change. Look up all the brouhaha about smart electric meters. To keep the electrical grid going and to avoid blackouts, in many communities (mine is one of them), they remotely control things like your thermostat temp, no matter what you'd like. This way, everyone has some cooling or heating, and they avoid week-long blackouts that would literally kill people. But people are very against this! So, invent all you like, but you can't invent around greed and a sense of entitlement. (Entitlement to air conditioning? What a bizarre concept.)

I believe the great-great-great-(maybe another great or two)-grandchildren of people now being born may be living something like an 18th century agrarian life again (though surrounded by plastic trash from the petroleum age). Instead of spraying petrochemicals on their crops to increase the yield, they’ll once again spread manure. Yes, manure smells bad, but compared to death by starvation, guiding the manure-spreader around the farm once a year doesn’t sound like a terrible future.

So I’m an optimist about the distant future.

It’s just getting from this point to that point, particularly in how that excess 15 billion humans gets culled, that I’m afraid will be ugly and scary.
Posted by Lou Cadle at 6:30 AM