I wanted to update you on what I'm up to these days. I'm proofreading Oil Apocalypse #4, Parched, and I'll turn it over to the pro proofreader on March 1. I think I should be able to get it out around March 20 with a three-week pre-order period. 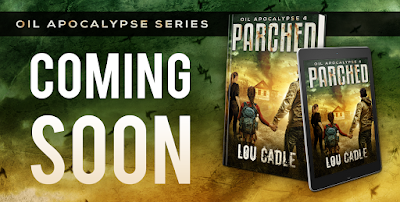 I'm not 100% sure where to go from there in the tale. I had outlined a book 5, but it was going to be a terribly bleak story, and I'm not in the mood to do that at this moment. (It gets harder to kill characters the longer I live with them!) So now I'm dithering. (You can stop at book 3, or you can stop at book 4, and it should feel like a complete series, no matter what I end up saying in book 5.)

I have a related series planned for longer after the end of oil, hundreds of years later, with a distant descendant of Sierra in the lead role. Have you ever seen the TV shows about Life After Humans? (there are two or three.) This fascinates me, how humans might be rebuilding while around them, there is rusting steel from collapsed bridges, crumbled skyscrapers, and other old tech that still exists, doesn't work, and creates something of a puzzle for the survivors. I've done quite a bit of reading about simple tech--building a wooden windmill to grind grain, blacksmithing, and so on. I plan to write that three-book series in 2019...unless some new, shiny idea jumps up, raises its hand, and demands to be noticed.

Ideas, by the way, are never my problem. I have files stuffed with ideas for novels, stories, and probably a dozen first chapters that wouldn't make half-bad books were I to continue them. I woke up a month ago with two great ideas for books I'll probably never have time to write. I'm an idea factory! The difficulty is in choosing between them, finding something I believe my fans will like but that won't bore me by being too similar to what I've already written.

In personal news, I'm moving halfway across the country in March, with the dates not yet set in stone (partly because of weather). What this means is that I might not be able to blog every single Sunday in March and April, but I'll get some articles up on some Sundays.