Repost: some of what I read as research for the Oil Apocalypse series 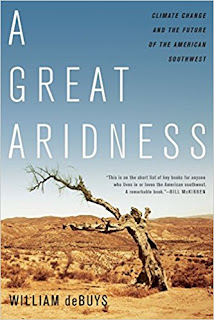 1) Anything I could find on small ground-unit tactics, including parts of the US Army field manuals and after-action reports from Australian, US, and British ground troops going back to the 1950s. In a few cases, the reports had a few lines about what it felt like to be there and vivid descriptions that helped me imagine (though I’ve never been in combat myself) what that might be like. Many thanks to those authors.

2) I admit that I’m no expert on weapons (I’ve fired a half-dozen, but that’s about it), so online manuals and discussions have helped me appear (I hope) something other than a fool on the topic. Friends help, and I’ll continue to use my friends for just that purpose as I write the rest of the series. A big thank you goes out to them for this help.

3) Though it’s a subtle part of the setting at first, there is a warming trend in the deserts of the southwest US right now and I’ve extrapolated worse in the near future setting of my novels so that the snow level is higher, the mid-altitudes hotter, and the animal populations are shifting. I’ve read paleoclimatology edited for the non-professional reader, including The West Without Water, Ingram and Malamud-Roan. I’ve read climate change books that focus specifically on Arizona and New Mexico, including the beautifully written A Great Aridness by William DeBuys. I revisited some of the ruins of Sinagua and Hohokam people in Arizona where drought and heat drove them away from their home (and which also drove other cultural changes that led to the abandonment of many Indian cities in the 1400s in the southwestern US.) Brian Fagan’s books on water and climate and the history of human civilization provided some additional help. As the series progresses, it becomes more of a cli-fi series.

4) Over the past three years, I’ve read probably everything written for the general audience on peak oil since 1990, including many blogs and debates in comments, ones from the wackdoodle (and the topic seems to attract some of that!) to the sober. I’ve interviewed a petroleum engineer, viewed every documentary movie on the topic I could find, and if I’ve missed a single popular book, I’d be shocked. (Thanks to the public library and the concept of free inter-library loans for much of this.) For a quick overview, I might suggest (though it is not without its problems) the film A Crude Awakening.

5) Wikipedia has become a sine qua non for most authors. I probably look at some page there five times a day. WokFI is just one page I looked at one day (for a scene that lasts barely 25 words), but hardly an hour passes that I don’t look up something like that. I remember the days when you had to drive to the library and look in books and Periodical Indexes and ask reference librarians (who are terrific people) and call around to find friends of friends of friends in order to find such facts. I donate every year (often twice!) to Wikimedia Foundation because they save me a lot of time and effort.

People tell me I spend too much time and effort on research, but as a reader of novels, I like to think the author is telling me truth about the real world rather than nonsense, and so to me it's a worthwhile use of my time. Besides, I like learning, so it's no chore.
Posted by Lou Cadle at 8:36 AM