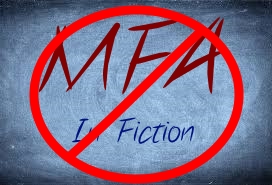 So my advice if you’re even thinking a little about doing this is:
Take it from one who knows. The MFA in fiction writing is a nonsense degree, and it won’t get you any closer to being a writer making money from writing fiction; indeed, it will probably push you away from achieving that goal. If you must do it for whatever reasons drive you to, heed my advice about minimizing its damage to you. Like a good parent, I really am saying it for your own good.

Thanks to The Passive Voice and its commenters for reminding me I needed to write this post one day. Kris Rusch has also spoken about the matter intelligently. Let the Truth be known.
Posted by Lou Cadle at 10:25 AM