Not just the germ for the Oil Apocalypse series of novels, but for my thinking about the collapse of civilization, sprouted decades ago, at university. There, I read various Club of Rome publications and Limits to Growth (which is entirely right in general, though people slam it for being wrong in a few specifics). Political science professors introduced to me to some fascinating principles that I absorbed. I didn’t think of this often as a young adult--I was busy getting laid and establishing a career like most people in their 20s--but it was percolating in the back of my mind. I wasn't yet a writer and didn't think people like me could be writers. 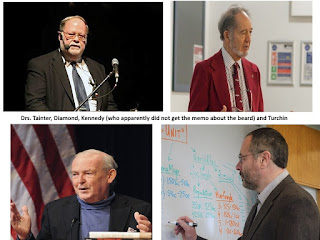 If you want to know more about Limits to Growth, an easy way to learn is to read this recent article.

I became interested in the topic of collapse--why and how civilizations fall--long before the Jared Diamond book on it. I should start with the 1988 book Rise and Fall of the Great Powers by Paul Kennedy, a seminal political science work that focuses largely on military power and how it first builds empires and then contributes to the collapse of them. I took some archeology courses in the 1990s and learned more about ancient civilizations that are naught but ruins now and why they may have ended. The Diamond book Collapse was released, and I read that. He speaks a lot of resource depletion due to overpopulation as a core cause of collapse. I’ve since read Joseph Tainter’s Collapse of Complex Societies, which talks about complexity of systems being the cause of collapse, a sort of weight that accumulates until it breaks a society into smaller, more manageable pieces. I’m currently working my way through mathematician Peter Turchin’s writing on the topic which analyzes the matter in a slightly different way. I suspect none has THE answer, but I suspect each has a piece of an answer to the question “what makes complex societies collapse?”

If you wander over to youtube, you’ll find interviews and lectures by all these men, or you can go read the Wikipedia pages on each of the mentioned books and get this gist.

If you’re not in the mood to read or listen to lectures, the most important thing to know is this: because of various causes, civilizations always collapse. It’s an inescapable rule, just like “you will die” is a rule. Whatever nation-state you inhabit is not immune to ending, as you are not immune to death. Wave your flag harder in response to this statement all you want, but it won’t stop the inevitable collapse. Rome’s empire fell. Alexander the Great conquered a huge swath of land but you’ll notice most of those conquered people don’t speak Greek any longer. Persia fell. The Mongols became something less than Genghis might have hoped. The sun sets pretty quickly on the British Empire nowadays. Collapse happens.

Often, collapse is more like "contraction." Rome fell, but you know, there is still a Rome in Italy, and some of the people there are descended from Imperial Romans.

Here's something to ponder: because we are in part a global society now, quite intertwined, trading goods across vast distances, is it more likely that if, say, the United States collapses will it take Canada, Australia, Britain, Japan, and Saudi Arabia with it? In the not-too-remote past, this was not so. Portugal used to be an empire of great power. When it collapsed from that position and because a much less powerful nation, it was good for the rest of Europe, not bad. It probably would be a real problem if that happened today--and not just because of the EU.

Another interesting question is: what does collapse look like in the modern age? Does it happen boom, overnight? Preppers obviously think so and most post-apocalyptic novels, including mine, cater to that belief/fear/desire. Or does it happen slowly, in a stair-step fashion, and in such a way that only a few people understand that they are living in the midst of a collapse as it occurs?

Part of the problem with how the human mind works is that we want simple answers and we think better when contemplating the short term. Trying to think about the collapse of vast civilizations, including how our own will collapse, takes a disinterested perspective, and a broad view.

While my other post-apocalyptic novels are about a specific triggering event, the Oil Apocalypse series depended on my inventing imaginary answers to these more complicated questions of how and how quickly collapse occurs. There is no way to write an exciting novel while including all of this information I’ve learned. I tried to hint at some of the complexities of the slow collapse leading up to the catastrophic event of the destruction of the Ras Tanura port in book 1 of my series, and I hope I was neither too subtle about that, nor too dull and academic. Spoiler alert: there's a second series planned for a long, long time after this series. That's because I think people will survive collapse, and I make this belief into fictional reality in series 2.

So in books 2-4 of the first series, and in the second series, I’ll let the slow collapse continue....