My new series is going to be set long after the apocalypse, and the world (or at least continent) as we know it will have fallen back to a 17th or 16th century world. Wheels, for instance, will be carved, wooden, and "tires" will be of salvaged metal strips. Someone has to do the salvage work. Someone has to carve the wheels. 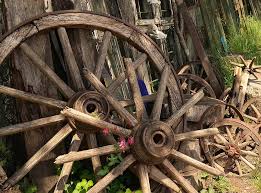 Not that there will be gasoline engines to pull the contraptions the wheels are on, mind you. Horses or people! Or people just drag the plow or ard themselves, roped into it, rather than like this guy who apparently has some deer-dalmation hybrid pulling his. (Egypt. interesting place. 😏) 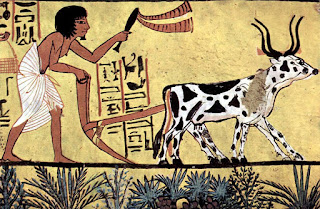 My book is partly set in a wooden windmill, where grain is ground for the community. I've been educating myself on the history of windmills, and how complex they grew with people adapting them using nothing but quite simple tools. Lubricated by bee's wax, these machines sawed wood, ground grain, made Holland habitable, made paint, and all sorts of other items for use or trade. I enjoyed musing about the innovations, who came up with them, how long it took to get it "right," and the sort of person who could innovate. Honestly, it took me a week of studying them to figure out the basics!

Consider the design of a millstone, carved by a stone carver or millwright by hand. They must have started with just two stones, millennia ago, and came to this point.The more you think about the design--and read up a little on it--you see what an astonishing bit of technology the design is. It grind the grain, it pushes the grain out, and it doesn't pulverize the grain. The stones are further apart near the center and closer at the edge. The design controls the movement of the grain (eventually down into a hopper.) Most rotate about 2 times per second. Here's one design, but most look something like this. 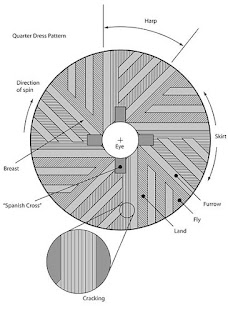 I'm reading widely, not quite knowing what will be of use. And some of this is based on TV shows I watched years ago, like "Life After People," where they explained how the buildings, bridges, and monuments of our culture will fall apart quickly in the absence of our keeping them up (and having the petroleum to do so). Articles I've been bookmarking for over a year might apply--like the "fruit walls of the 16th century" article I found that shows how to grow fruit by using the heat-storing capacity of southern-facing clay or brick walls to create a warmer microclimate that ripens the fruit sooner and allows you to grow figs in Montreal. (I may not need this, but it's the sort of thing I bookmark and may or may not use.)

My writing process is, as I do this research, it starts to come together for me, characters begin to pop into my mind (Who does the windsmith interact with most often? What is her role in the community? What kind of person could carve millstones for a living?) I simultaneously gain the knowledge I need to make details correct and (I hope) vivid and get to know my cast of characters. When it feels ripe I begin to outline a series or book, though I also have self-imposed deadlines, so it darned well better ripen up on time! :D

Jan 1, I plan to type the words "Chapter 1" and get going on the new series. It's a little unusual for indie post-apocalyptic, as the apocalypse will be rather far in the past, but there are similarities in how it's a survival adventure, and new sort of apocalyptic events will spring up for the characters to deal with. As a minor point, climate change may have been nasty for the Oil Apocalypse characters, but when it changes back for their descendants to a colder world, a new kind of climate change will be just as difficult to adapt to. There are other problems they'll face, but I won't spoil it for you. It's coming in 2019.