Session 2 was all predicated on the basic setting of "the vegetable garden." I got a list of genres, and I went at it. 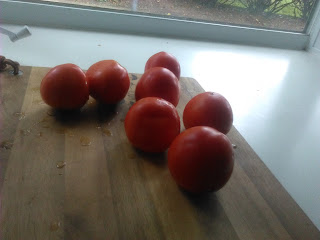 Romance, enemies to friends romcom. In England, two allotment gardeners argue over everything: your fruit bushes are in the path, your compost attracts flies, your mulberries are staining my pavers, your hot peppers are interbreeding with my sweet peppers… and all the while they fall for each other.

Romance, rekindled. Divorced parents teach their kids to garden and come back together over a love of  kids and gardening.

Romance, historical/forbidden love. In Regency England, a woman whose Earl husband is gay falls for the gardener. (Wait, I think this is a little like Lady Chatterly! Oops, but you could write it entirely differently).

Romance, steamy. + Friends to lovers. Well that about writes itself! Be careful though, as you may not know cucumbers grow with little prickles all over them. Love among the courgettes. Optionally a gay romance.

Romance, forbidden/contemporary/older love. An affair between two Master Gardeners, each of whom has a problematic marriage (one might care for a disabled partner who can no longer have sex, the other a spouse who often cheats, though this character has never). Sharing an enthusiasm builds a bond, and week-long training creates and opportunity. Tragic, as the one caring for the disabled partner cannot, will not leave.

Women’s fiction. A woman soil scientist tries to gain traction in a field dominated by men, while at home, problems with her teenage children escalate.

Mainstream fiction. When, after his genetic experiments with insect-resistant broccoli have been stolen, MC devises a diabolical plan of revenge on the theft. It involves plant-killing fungi.

Post-apocalyptic. When, a plant-killing fungi developed by once scientist to exact revenge on a plant thief get out of the lab, crops die, starvation ensues, and civilization collapses. Good luck growing more food once that’s out there!

YA. A group of four teens who love vegetable gardening are outcasts, but together they build an outsiders’ group that helps them weather four different teen problems. (Divorce of parents, eating disorders, etc.)

YA. Taking down the popular kids trope. Bullies get their comeuppance. TW: Going to be some tomato throwing in this one!

MG. A group of four MG kids who love vegetable gardening are outcasts, but when the autumn dance is on the verge of disaster because the caterer didn’t show up, they rescue everyone with their delicious tables of fruit and cruditees. (just add ranch dressing.)

Kids. A child decides to grow a vegetable starting with every letter. X may be a problem he never solves, but there’s a lesson in that too.

TJ 1) A slave woman hoeing the rows catches TJ’s eye. Uhoh, how does she avoid the handsy boss without getting killed or sold or beaten?

TJ2) A slave woman ends up being a great gardener, and she is elevated in responsibility.

Survival fiction. Lost on a desert island, Cruz Robinson tries to find ways to grow enough food to survive. Animals, insects, birds, tropical storms all seem to conspire against him.

Fairytale Retelling: retelling Jack and the Beanstalk in modern terms. It’s about… aha, alternative fuels. The giant is a not very disguised version of Elon Musk, mad, bad, and plain GD weird.

Comedy. Dad decides he’ll start a big garden. Everything that can go wrong will go wrong. Expensive! Disastrous! Embarrassing to the kids and everyone else! Things fall, things burn, he gets hives. Bears arrive in a place there are no bears to eat the berries. You name it. Police intervention is needed at times, animal control, even Child Protection is called. Poor dad. But everything turns out okay in the end. He gets one perfect tomato, at least.

Kids mystery: who is stealing the tomatoes from the garden patch? A person? An animal? Which one?

Cozy mystery series: all titled with bad puns, of course. Hoe dunnits. (omg, what is wrong with me today with the puns?)  Book 1. You Bug Me! A gardener friend everyone in town seems to adore is poisoned with insect poison. Hoe dunnit?

Book 2. A cook has been poisoned when someone took parsley out of their garden and replaced it with (that poisonous stuff that looks just like parsley, too lazy to look it up.) The Cook is Toast. Hoe dunnit?

Book 3. A showpiece garden of the Snooty Old Lady in charge of the garden club is sprayed with Roundup, on the way to her being murdered. Was it the person who lost the election for that presidency? Her ne’er do well grandson? Her quiet and meek husband? Hoe dunnit? (out of joke titles now, to everyone’s great relief)

Book 4. The local organic farmer who sells at the farmer’s market a town up is murdered. “Greenie, die!” is spray painted on his new 2000 square foot high tunnel. Who did it? The fired worker? The unpaid intern? The worker who sells the veg at the market and used to sleep with the farmer?

Book 6. The small town’s remaining living gardeners (funny thing about small town cozy series, that anyone is left alive by book 6) decide to build a community garden. Many arguments follow  about design, soil type, size of plots, fencing, you name it. One of them is found dead on the newly dug plot. Which of them did it?

Historical/war short: Napoleon’s Army is on the march. They need to be fed. A farming widow is approached by a logistics officer, and instead of raping her and stealing the food, he immediately likes her and negotiates with her. He will take her adventure-starved son into the army, he will pay her money for her crops, and he will steer the army away from her. In exchange, he only asks that she (er, what? I’ll figure that out later, when I write this short story.)

Political: the leader of the nation wants the gardener of the mansion/palace to rip up all the flower gardens and replace them with food, an encouragement for the populace to be more self-sufficient. A bitter battle ensues (with one person very powerful and the other only having secret ways to undermine him).

Political/historical. After the collapse of the Soviet Union in 1991, Cuba planted thousands of urban cooperative gardens to offset reduced rations of imported food. This happened. How? Who spearheaded it? How did they get individual people to do it? Who was against them? Who wrote the propaganda that worked so well? I don’t have the research, but the research would inform the book’s plot.

Espionage/historical: “In 2011, a field manager for agribusiness giant Pioneer Hi-Bred International found a man on his knees in an Iowa field, digging up seed corn. It was Mo Hailong — also known as Robert Mo — according to court documents. Hailong, who is originally from China, pleaded guilty in January 2016 to conspiring to steal trade secrets involving corn seed developed by Monsanto and Pioneer.” There’s a whole novel idea right there.

Historical: The David Fairchild story. “David Grandison Fairchild (April 7, 1869 – August 6, 1954) was an American botanist and plant explorer. Fairchild was responsible for the introduction of more than 200,000 exotic plants and varieties of established crops into the United States, including soybeans, pistachios, mangos, nectarines, dates, bamboos, and flowering cherries.” He sees himself as an explorer and botanist, some people (like those of us who love pistachios) might see him as a minor hero, and some cultures might see him as a thief. A novel could explore those various views of him, through invented characters, a local poor farmer somewhere who doesn’t understand the deal he’s making, the head of a nation who knows his crop being exported to the US means money for poor farmers, etc.

Political: Aboriginal Australians and white Australians making money from “permaculture,” who appropriate native ideas and capitalize on them. Conflict between a local native leader and a greedy permaculture lecturer/book author. Explores the question “Who owns knowledge?”

Military/historical. Samuel Pepys (the diarist, to most of us) was also instrumental in figuring out how to feed the Royal Navy, after a defeat to the Dutch that was partly due to sailors’ hunger. Who fought his new ideas? Good conflict there, and you could switch back and forth to an actual ship, where sailors were hungry, had scurvy, etc.

Mainstream fiction. A local domestic arts teacher in an upper-class school wants to teach kids how to grow their own food. She is opposed by the kinds of parents who don’t want their children’s hands ever dirty, who expect their kids to always have maids, cooks, chefs, and to be eating out at $400 restaurants anyway. But she has good reasons to want to teach this to kids. The principal is caught between. But she’s a tough cookie, and she fights them, winning over a few other teachers, a few parents, and a number of students.

Historical YA. The garden in the orphanage. There’s a mean cook and a nice teacher, who battle over how kids will be treated as workers in the garden. From the point of view of a 15 year old child, who has friends, enemies, encounters lazy kids, a cruel boss in the cook. He’s just trying to survive until he can leave the orphanage, and find a little happiness along the way.

Mainstream. A sculptor wants his/her art to be ephemeral. Ergo vegetables. The antagonist is the local art critic who thinks they are ridiculous (so do I so far, but I’ll work on it! Lol) They battle over this.