How natural are disasters? 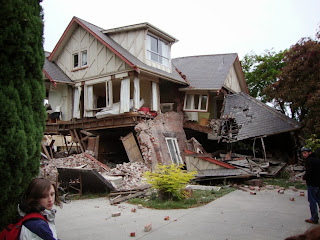 When a volcano erupts, when a big earthquake happens, when that earthquake causes a tsunami, a “natural disaster” has a natural cause, to be sure. (Usually. Fracking for natural gas now causes a lot of earthquakes in Oklahoma and Montana, but so far these are far too small to kill anyone.)

But in the cases of wildfires, floods, hurricanes, and electrical outages, often the “disaster” part is about not what nature has done, but about what we have done. It is a natural event made disastrous by human choices.

This is even true to an extent about earthquakes. Even a 9.0 earthquake would have a hard time killing people if we all lived in yurts or tipis. A few living such a life would die from rock falls, and on the coast many thousand might die from a tsunami were conditions right, but most people these days die in earthquakes from stuff—man-made stuff—falling on their heads. Roofs, facades, windows, paintings, lumber, facing stones, pediments, and bridges all come tumbling down when the earth shakes. In your own house, a heavy glass-fronted painting hanging on the wall could be the end of you in a quake.

If a hurricane hits an uninhabited island, there is no disaster. That’s just Mother Nature doing what she’s done for millions of years. Palm trees evolved to make it through hurricanes. And while hurricanes are certainly a force of nature, if we made better building decisions, wrote stricter zoning codes, and made evacuations mandatory on the mainland and built tough concrete shelters on islands, almost no one would die.

As the earth warms, as oceans warm, and as storms become bigger, incidents of extreme weather and wildfire grow bigger and more dangerous. This too was our choice—is our choice every time we drive a car or turn the air conditioning down or the heat up, with each child we have who goes on to have more children, all of them living the standard suburban life with its profligate energy use. This is our choice, not Mother Nature’s to drive worse weather disasters.

We make choices that can make weather and tectonic events worse...or better. All of those natural events are, whether we think of it often or not, necessary to life on Earth as we know it.

By law, in Miami, for instance, you must build better now to survive hurricanes. (But what do poor people living in sub-standard housing do? What do the poor of Puerto Rico do? Or the poor living in the flood plains of the world’s big rivers? I'll address this in more detail next week.)

Zoning regulations are also stricter in LA and San Francisco, which have some of the most stringent building codes in the US. (Japan’s are far better still--and there’s hardly a type of severe disaster Japan isn’t prone to.) Most of the buildings that lasted through the 1989 Loma Prieta Quake will last again through a similar-strength quake. And if buildings suffered cracks or survivable damage, the owners, if they were smart, did some retrofitting. I worked in an historical brick building in San Francisco, and the owners spent tens of thousands of dollars in the retrofit in the early 80’s, and the building came through the 1989 quake perfectly intact, though most brick buildings will crumble into a pile of bricks and mortar that has returned to sand in a big quake.

At a personal level, people can also get smarter. Once I experienced the quake, every house I lived in thereafter I did certain things to. I strapped the hot water heater to a support beam. I drove screws through the back of bookcases and knick-knack shelving and into studs in the wall. You pick up one disaster of a house in a quake, and you don’t do it again. You pay for a seismic inspection and do whatever the inspector tells you to do.

I know I'm being terribly judgmental here, but I do not understand when I see videos of Oklahoma post-tornado, and we’re looking at nice ranch homes, and the reporter says only one in 100 people have a basement or tornado shelter. People, you live in Oklahoma! Don’t you love your children? Apparently not, for there aren’t even laws about elementary schools in Oklahoma having tornado shelters or safe rooms. People standing in front of leveled homes will talk on TV about how they lost their new flatscreen TV and boat, which they apparently had the money to buy instead of a tornado shelter. That surely fits the definition of insanity. The absence of a legal requirement for schools to have shelters seems to me criminally irresponsible of zoning commissions and Oklahoma's state legislature, and I don't know about you, but I hate thinking of those children dying who do not have to. People, it’s only money. So, a better legislature passes a law mandating school shelters, and everyone in the district pays an extra $25 on their annual property tax bill for five years to build the school a shelter. Surely a human life, the life of an 8-year-old, even if you never meet that child, is worth that tiny amount to you. Isn't it? Apparently not, for it's still not happening there.

So before we blame Mother Nature for disasters, we should look in the mirror. Are you contributing to climate change more than an average person on the planet? Is your house in a risky area and you haven’t bothered to do everything you can afford to minimize your risks? Are you one of those fools who owns a working car but does not obey a mandatory evacuation order? (Do such people simply not understand the word “mandatory?”) And please tell me you’re not one of those fools who runs out to the dock to take a video of the storm surge coming in and the 12 foot waves breaking! If you want to live in wildfire area, you think hard before buying a place right up against the woods or dry grasses, asking yourself if the pretty view is worth the risk, and you consider concrete and tile construction before you fall in love with the beautiful hardwood and cedar shake ranch home. You keep the yard picked up and trees far away from the house, just as the fire marshal recommends. And if you're a developer, you do not fight sane zoning laws that keep safe distances between subdivisions that help prevent a wildfire jumping quickly from one neighborhood to the next.

Even if we do everything we can, some people will still die in natural disasters. A hurricane’s storm surge can be quick and powerful. A traffic jam in a n evacuation zone can be so terrible that people end up exposed to the disaster and die. You might already be disabled, and it’s impossible for you to get out in time. You might be poor and not be able to evacuate. Your state may have planned badly for evacuations and there's not enough gasoline for sale to get everyone out of the area. Bad luck happens.

But please, don’t make a natural event into a disaster it didn’t have to be. Live in as safe a place you can afford, and be as prepared as you can. (more information at https://www.ready.gov/make-a-plan)

I know I'll never convince TV to write copy about Mother Nature's "wrath" during disasters. She is not actually wrathful. She's doing what she is meant to do, what she did before people came along, and what she'll do after people are gone. The dramatic events like hurricanes and earthquakes are only disastrous to us when we've made choices that don't take their inevitability into account.