I'm done with my experiment!

I began this thinking I could spin 1000 story and novel ideas in a week, which would be 142 per day. Mid-day, I was thinking, probably I couldn't do this daily. Once a week, I could get 140 maybe. And then I hit idea #106, and I liked it. Really liked it, and I "had to" go write some more notes about it. I wrote a couple of scenes a brief outline, and it went into my real "ideas" folder along with others. And now, having done that for two hours, I'm due at a social event and can't write this evening to get the other 37 (which I do think I could get).

Could I write 142 again tomorrow? No, I don't think so. I need a few days off to re-charge the creative computer. A week would be better. So I revise my previous brag. I think I could write 100 kernels for stories and novels per week... for a while. A few thousand per year, and I'd only be able to write a handful of novels and a handful of stories from them. 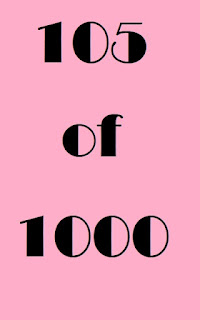 Here are the final few I wrote today:

Horror comedy story based on my writing friend AM Scott saying “I use the best parts of my husband for my heroes.” (aww, I know. That is sweet.) A female writer actually uses the best parts of her husband for her heroes. All that’s left after a year is the inability to ask for directions, acting like a head cold is going to kill him, and a wet spot. (okay, it was sexist of me. But funny, c’mon.)

A serial killer who decides he wants to kill stupid people. He finds them at sporting events, in bars talking about politics, overhears them asking questions he thinks are unnecessary. Ironically, he’s not as smart as he thinks he is, but he does befuddle police because they can see it’s serial but not see the connection between victims.

A little boy in the 1960s in the US reads an old novel about a kid being abducted by Gypsies. His home life is unhappy, and he starts hunting for Gypsies that he hopes will abduct him. In so doing, he makes a sympathetic older friend who saves his sanity and gives him uncomplicated love and approval.

A politician with a good heart/intentions also has a drunken brother. Her story is a tragedy, for she loves the brother so much, she lets him take down her career. Love interest of a local cop who can see what’s coming but tragically can’t get her to cut the brother loose. She loses career, lover, and is left with a useless, hopeless brother.

A mystery is in the ice rink where PI both skates for fun and does massages for income, where a gigolo of a straight coach is murdered on the ice with a skate. A schizophrenic man skates there—he talks to himself, sees things no one else does, and thinks he can do tricks he cannot—and he is arrested for the crime. My sleuth’s sense of justice is upset, so she takes on the search for the truth, despite the risks.

A mine, 1971. One brother, new to the area, owes money to a loan shark. The other brother, very similar looking, is a hard worker but less bright. There’s a cave in. Brother A decides to take brother B’s identity, let him die in the mine, and come out with no debt. But someone is suspicious and an investigation ensues, and then a manhunt, from both police and the mob.

This new technology that allows a blind person to see through intrusion of receptors into visual cortex; they see dots. What if they started seeing something we do not? Spectral beings, dead people. Something important but very hard to convince others they really were seeing.

What if schizophrenics were a new species, a more advanced human? Let’s posit they are, and see where a novel starring a schizophrenic and a young doctor (resident at a hospital) who suspects this will take us, in the face of skepticism, the doctor’s nasty supervisor.

Horror short story. Every time Jack looks in a mirror, it steals a piece of his soul. He knows he’ll be in trouble by the time he’s 25. And indeed, he is.

In the nursing home, various characters get involved in an ongoing dispute. One man, a compulsive liar, keeps telling lies. When one day he claims he is “Question Mark” of “And the Mysterians” (a 60s band), one old man has had enough! He sets out to prove the liar is a liar, and much trouble ensues.

A petty criminal driving along sees a sign on a church. “Hope for Total Failures.” Instead of steering in for pastoral counseling, this recognition of himself as a “total failure” spurs him on to commit more violent crimes. But he really is kind of a loser (the sign was right), and he’s going to get caught and killed.

“The bus ride.” A lighthearted slice of life story story. Only because I always wanted to use something a bus driver once said to me “This is the shortest mountain chain in the world.” I mean, who keeps track? But more strange comments from passengers and the driver could keep this lively for 2500 words. Just go out and listen at a bus stop, or the beer tent at a county fair, and you’ll get plenty of comments to add to a story like this!

A SF writer names his three robots Hex, Hox, and Rex, and his proofreader murders him. (Thanks, Marcus!) A short story, for they'll figure out whodunnit pretty quickly. And no jury of proofreaders would convict.

You know that thing they say about “if you heat a frog in water slowly enough, from tepid to boiling, he’ll never jump out. He’ll just boil to death and die.” So: the story of whatever sicko scientist ran that experiment, if it really ever was run. What drove him to do it? What did people say to him when he did? Did he ever have nightmares afterward?