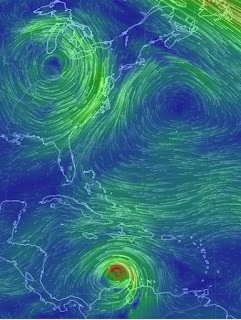 ..and the models and forecast tracks are inching west today, so that part of my guess did come true. If you're in Florida or the Carolinas, it's time to do early prep: take in the lawn furniture, clean out the freezer, put a bunch of bottles of water in there to freeze solid by Wednesday and keep it colder longer, fill up the spare gas cans on your way to/from work tomorrow, buy or charge batteries. As the forecasts narrow it down, you may need to do more. If they tell  you to evacuate, please, evacuate.
Posted by Lou Cadle at 8:03 AM