The kids--graduate students, but I’m getting to the age that anyone under 30 could be a kid of mine--are already settling in. I ask Marcie, the permanent worker in charge, if I can take a specific pile of rocks where no one else is working, and she okays it and marks it on a detailed map and in her expedition log. I watch my feet as I move off the trail, making sure that I don’t step on a fossil. There’s a bit of shade not much larger than my boot to the right. I check the spot for fossils and snakes before shoving my pack in there. I’d rather drink water that’s 100F than some that’s 140F, and that’s the difference the shade will make to my water bottle.


The tools I’m most likely to need are already on the belt I wear, so I grab the rock hammer from the pack and sit down at the base of the hillock of packed gravel. I’m not going to be banging the rock hammer against anything. I use the tip to gently move loose rocks.

I’ve been told to keep a careful eye out for tiny bones, like rodent bones. “A bat would be great,” the lead paleontologist told me, and I had to look up what a bat skeleton looked like to imagine what I might be looking for. Lots of thin, thin finger bones. Pretty scary looking monster without its flesh. And the tiniest sharp teeth. I despair of finding one of those. It could easily be mistaken for a shard of mica. The slender finger bones would be unlikely to survive, but you never know. A skull or jaw, quite possibly. I’d memorized what they looked like. 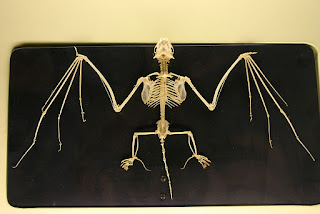 I like this time of day, working before the heat feels as if it might literally kill me. I’ve asked to start at 6 a.m., but the grad students don’t wish to give up late-night partying, and the permanent workers don’t believe they can start then anyway; they are government workers, and if there’s anything the government is bad at, it’s logic. Better to kill a couple G5s in afternoon heat than to change the work hours! So this is as good as it gets, temperature-wise, and I appreciate the relative comfort while I have it.

Early mornings and late afternoons are also better for hunting because the sun comes in at an oblique angle. The way the light hits a fossil tooth or a fragment of still-shiny fossil bone makes it reflect sunlight back at you. You can see more of them when the sun is low than when it is directly overhead.

In fact, over where Marcie is working, I see a glimmer right in front of her boot. “Hey, I think there’s a tooth or bone right in front of your right boot,” I say. She reaches down. “About three inches out from there,” I say, then, “Now an inch to your left.” She finds it. “Yeah! Rhino tooth. Good eye.”

I don’t have a good eye, actually. Perhaps if I had more than five months at this work, I could learn to have a better one. But some people have visual acuity that allows them to pick one slightly different tiny bit out of many similar tiny bits. I’ve showed the seasonal rangers how fossils look in situ, by walking up to them with a handful of rocks and one tiny fossil that I carefully selected, bringing its bag and label with me, so I didn’t remove it from its data. “Pick out the fossil” I said to them. They couldn’t. The rock and the fossils are much the same color, and it is that trick of light that let me see the tip of the tooth. I haven’t a good eye, as Marcie said, but good luck--though as scientific as paleontologists are, many of them believe in fossil luck, too.

I comb through my small pile of rocks. I won’t leave this six by six mound all day. And someone else could re-examine it tomorrow and probably find ten fossils that I missed. I find several. One is a bone that could be the toe of something medium-sized or the humerus of something tiny. Even the grad students would have a hard time deciding which; it’ll take a more experienced paleontologist to tell what it is.

I find an oreodont tooth. Oreodonts! If the people are right who say only 1 in a million of individuals of a mammal species are fossilized, then once North America must have been wall-to-wall oreodonts, grazing every square inch of grass from Minnesota to the West Coast. (A West Coast that was some hundreds of miles east of where it is now, by the way.) There must have been herds of tens of thousands moving together. This is only one of many working fossil sites in North American filled with them, and there are sufficient skulls in the collection that I think it would be enough to build a decent-sized storage shed made of nothing but oreodont skulls. It’d be pretty, I think, but the scientists wouldn’t allow that to happen. So here’s yet another tooth.

I also find three fossilized dung-beetle brooding balls. Those are plentiful enough in these parts that we could build a whole city with them. If you have hiked a good deal, you have probably stepped on a few hundred yourself. I imagine armies of dung beetles, hurrying around under the endless herds of oreodonts, gathering up their dung to make the balls, laying their eggs inside, and moving on to make the next baby-dung-beetle incubator.


Today, it is just us five people here among the bare rocks--us and a few rattlers keeping themselves well hidden. But this bleak canyon was once a grassy landscape that teemed with life.