As you thought about all this over the past two years of research, what was the most troubling single fact you ran across?

Perhaps this: in the United States, a majority of lettuce is grown in Yuma, AZ. (A good deal of the other fertile green land of the US has either suburbs built over it or grows grains for cows to eat and to sweeten Coke--and no, that isn’t the troubling thing! Or, yes, it is troubling, but...) A popular food all over America is iceberg lettuce, which contains 63 calories per pound. A liter of diesel fuel represents 9 million calories. (Calories = heat = energy to do work, whether the work gets done by human power or internal combustion engines.) From Yuma to, say, the outskirts of Boston is 4500 km/2800 miles. Long-haul trucks get about 6 miles per gallon of diesel (for my international readers, I believe that’s 39 litres per 100 km--correct me if my maths failed me). One common size of truck carries 40,000 pounds of lettuce or 250,000 calories of food per truck load. Multiply all that out and you see we’re using 250 million calories of diesel to transport 250 thousand calories. (And half of that lettuce will end up thrown out, so really, only 125 thousand calories will be put back into the human energy system.) When our great-great-great-great grandchildren are spreading the manure with a rake and think of this insane waste, they are going to curse our names and go spit on our graves. (which they'll have probably raided for bones to grind into fertilizer, if they're smart.)

I have a really crazy idea to solve this: grow lettuce near Boston for the 220 growing days it has, and just don’t eat it the other 140 days of the year. I know, I’m mad, MAD, I tell you. [Insert evil laugh.] 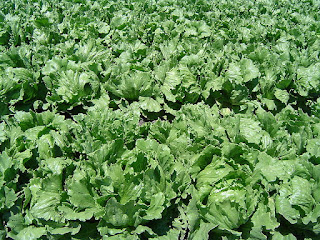 Um, Lou? Should I panic?

Definitely not. It’s not nearly the time to panic, and even when it is time, what use is panic?

Should I conserve gas?

Nah. I've quit thinking this way. I do out of habit, and I use solar power, and a low-flow toilet because I’m in the desert where water is going to run out one day soon, but I do all this knowing it won’t help. You use a gallon of gasoline today, or some guy in China uses it in five years, doesn’t really matter, does it? Petroleum will run out either way. (And all my using a low-flow toilet does is to allow developers to justify building another golf course or mall in the desert, so that’s downright idiotic of me, a person could argue.)

What should I do?

Right now? Be prepared not for the end of the world but for minor natural disasters--you know which are likely to strike you--and even more importantly for power outages. Because those will become more frequent before oil depletion is an issue.

Can’t we work to switch over to a radically different way of living and make the transition bearable? Something like urban gardening might help ameliorate some of the food issues you've talked about.

Urban gardening without petrochemicals is a smart idea but probably not enough to save us, even putting aside for a moment human nature (including greed, laziness, unwillingness to change, short-term thinking, unwillingness to believe the facts smacking us right in the face, aversion to physical labor, the urge to steal ripe tomatoes out of someone’s yard if they aren't looking, and so on). Maybe back when Jimmy Carter realized what was what and got the US to drive 55 (remember that gas-saving idea, fellow oldsters? Lasted for an eyeblink), there was still a remote chance of doing that if we rapidly added other measures like nationwide electric trains (totally doable with today’s tech, and totally nowhere on any infrastructure plan), different sorts of farm subsidies that punish petrochemical use, monoculture farming, and reward growing edible foods to sell locally, a move to 50 mpg cars within five years, and so on. We didn’t do it then, and we know more now and are closer to the end of oil now, and we’re still not doing it! Admit it: we suck at this kind of thing.

Conversions to a sustainable way of managing energy reserves require not just putting on a sweater in the winter and driving 55 but decades of innovation, engineering, and manufacturing (which will require petroleum to drive until the new way is profitable and probably it will require significant tax increases on gasoline in the US, which very few of us are willing to accept), and I think we’ve missed the window where we could have done that, and missed it by quite a few decades. Not only the end of gas, but an ugly end to gas has become inevitable, I fear.

Some people think the last possible time to act was the beginning of the industrial revolution. Thinking along those lines, I’d counter that perhaps the last moment to call a halt and reconsider would have even been the invention of grain agriculture, which put us on the road to here. But back then, they didn’t know diddly-squat about...well, anything they’d have needed to know that might have stopped them from taking that step onto the slippery slope. They thought the world was flat and ended 100 miles away, and I’m sure they saw some tar pits, but sensibly they thought those were things to avoid, not exploit. Having more of their children survive to adulthood via farming seemed a good thing (and why shouldn’t it have?) and not also the first step on the road to runaway overpopulation that would lead to population growth, the discovery of oil, and very bad results of the end of oil in the long term.

Do you have no hope about a sane, rapid transition away from oil that doesn’t involve eventual cannibalism and billions starving and so on?

Sure. Mother Nature could unleash a pandemic on us that kills 95% of the population and renders 95% of the remainder infertile. That would help quite a bit. But I’m not sure that’s exactly “optimistic” or hopeful in the way you might wish, though it might be a little better to die of a viral respiratory disease than to be eaten by cannibals. (Never having experienced either, I’m only guessing at their relative merits, of course.) And, even if that pandemic happened, gas would still run out in several centuries--but in that case we might have been given the time to create a more gentle transition to the post-oil world. Are humans capable of becoming anything but short-sighted and greedy so that after the pandemic the ones left would use that time wisely and in that way? History doesn’t make me an optimist, but we’ve done great things before (like democracy and the internet and getting to the moon) so who knows?

Ack! You’re a horrible person, Lou! Can’t you say one positive thing about anything?

Sure. I’m really quite a cheerful person. It’s a nice day, I’m healthy and in no physical pain, and I hope you can say that too. Pour yourself a margarita if you drink alcohol, and re-watch your favorite comedy movie, and if someone close at hand loves you, enjoy laughing with him or her. Kiss your dog or cat or parakeet. Any day we’re not being buried or cremated is a fine day. Be grateful, as I am, that your life is being lived in this amazing, brief window when petroleum drove all this technology and easy living. “Alexa? Give me a recipe for margaritas.”
Posted by Lou Cadle at 6:30 AM