My World War II thriller is out

Code Name Beatriz is out!. 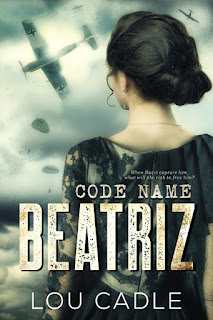 "Wireless agents have a six-week life expectancy after they parachute into France."

Antonia, devastated by what the war has taken from her, is numb to the warning, and willing to die working with the Resistance in France...until a special operation brings her face to face with a Canadian man who makes her want to live again. When the operation goes terribly wrong and the Nazis capture him, what will she risk to free him?

For some time I've been fascinated with the female SOE agents of World War II, Noor-un-Nisa Inayat Khan, Violette Szabo, and all the heroic women who parachuted into France to help fight the Nazis on the ground. What heroes they were! I hope here I've done them justice with my fictional Antonia, an agent code named Beatriz.

Other links will be coming as the book appears at other sites.  Thank you for reading.
Posted by Lou Cadle at 7:00 PM