Scary disease of the week: Creutzfeldt–Jakob

#5 on my countdown of terrifying diseases.

Creutzfeldt–Jakob disease. It’s rare, but it’s here--here meaning in the US, Canada, England, and Australia, where most of my readers reside. 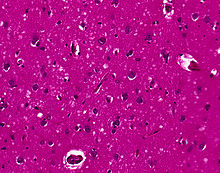 It’s a prion disease. Prions are not amoebas, not viruses, not fungi, not bacteria, those being the usual agents that cause diseases. They’re something else, not even a form of life, and we can’t do a blessed thing about them yet.

Worst of all, it’s not a good way to go. Because it in effect rots the brain, you have several stages of increasing dementia, hallucinations, muscle spasms, burning nerve pain, and eventually your brain won’t be able to tell you to breathe or swallow, which is what usually kills you.

Sometimes it comes from a genetic mutation. You can get it from eating animals that have it. (Don’t eat brains of any animal. I don’t care if you love their taste. Don’t risk it.) Cannibalism can spread it, so, er, avoid that too, in case you indulge right now. And you can get it from transfusions and transplants. Blood, transplanted corneas, and human growth hormone from infected people have spread it.

(Aside: my favorite discovery from my research for these posts was this line in Wikipedia: “In the U.S., the FDA has banned import of any donor sperm, motivated by a risk of Creutzfeldt–Jakob disease, inhibiting the once popular import of Scandinavian sperm.” Apparently, there was a Scandinavian sperm fad here that I totally missed???? Anyway...)