Scary disease of the week: introduction


In my new novel, I make fun of “scary disease of the month reporting,” and yet here I am succumbing to the urge to do the same thing in this blog. Let me get that confession out of the way, and let me also remind both you and me that what kills people most is heart disease, COPD (both made much worse by smoking), diarrhea (in developing countries), and complications of diabetes. Among infection diseases, malaria is the biggest killer, but it’s not a disease that many of my readers have to think about. (It occurred naturally in Australia, particularly in the north, but y’all have worked hard to eradicate it.)

But even though the numbers give us that list, for some reason, it’s the emerging infectious diseases that capture our attention and frighten us. The blog posts in the following week pick five diseases that scare me plenty.

What makes a disease scary to me?
So here’s a rating chart I devised for my own use. I assigned points in every category from 1-10 to be as fair as possible in choosing my top five. 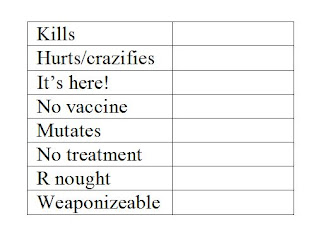 Those diseases that kill 100% got a 10, 70% got a 7, and so on. I went with the fatality rates with treatment in industrialized nations rather than its true fatality rate. As measles R nought runs around 20, most are under 10 so I gave it it’s median R nought score (if, on average, one sick person infects 4 others, it got a 4). “Crazify” is my neologism indicating the sort of torturous brain damage that scares me at least as much as physical pain and far more than bleeding out the eye sockets does. You might not feel the same about this issue, but that’s nightmare fuel to me. Imagine being paranoid, hallucinating, and demented, on top of the coughing or diarrhea. "It’s here!" means it is here in North America, something we could in fact catch right now. Usually that means it’s also in Australia and England, though not always. In one case, England has it worse than North America.

Diseases that are plenty scary but didn’t make my top five:

MERS. Terrible disease, a killer, no vaccine, but it’s still rare. You pretty much have to be in Saudi Arabia to get this and hang out with camels, or be a health care worker treating such people. It may be weaponizable though. Stay tuned to see what natural mutations and a spread to additional mammals might do to this one in your lifetime.

Measles. Worldwide, it’s a terrible killer, and the #1 easiest disease to pass along (it has the highest R nought). However, this disease is easily preventable with a vaccine. If you don’t vaccinate your children, there is no simple treatment and they have a good chance of dying. If enough people refuse to vaccinate, it’ll burst into epidemic status again in the developed world. 400 children die per day of it around the world as is. Enough people stop vaccinating, and that could jump to 4,000 or 40,000.

Smallpox. A nasty disease, very contagious, about 40% fatal, but except for some samples in labs, gone from the planet. This is not a promise on my part that some idiot won’t take those lab samples and start a pandemic again.

Naegleria fowleri, or the the brain-eating amoeba. Almost always fatal, not treatable, it scores high in my scary-brain-damage scale, and it’s here in North America, but you can’t catch it from the guy next to you on the bus. Not weaponizable and easily filtered out of city water supplies. But “brain-eating amoeba” isn’t a particularly comforting name, is it? (shudder)

Q Fever (Coxiella). I addressed this one in my novel 41 Days. It doesn’t kill now but it has a super-clever cellular trick that means if it ever was turned fatal by a terrorist manipulating the virus, or by Nature mutating it, it could be a real problem. All viruses are difficult or impossible to treat, and this one is no exception.

HIV. A killer, to be sure, but preventable and increasingly treatable (not curable, and the treatments have nasty side effects, but treatable). It is not potentially a pandemic, for it is already a pandemic. Pretty awful, but not awful enough to make it into the top five for me.

Pneumonic plague. Weaponizable and particular scary because you could wander around infecting others for a week before you got sick, scoring the maximum on the R nought scale, this can’t make the grade because it’s bacterial and almost any antibiotic will cure it...so far. (insert scary music cue) Get an antibiotic-resistant form of this one going, and we will have bad trouble. 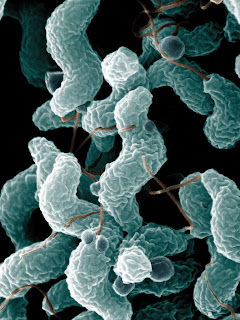 Next week: Disease #5 on my personal list of scary infectious diseases for humans.
Posted by Lou Cadle at 7:28 AM